Which Is The Winner: The Tortoise Or The Hare

When it comes to delivery of organisational savings, it may be that the more modest incremental strategy is the ‘tortoise’, that leaves the high impact transformation plan trailing behind like a blushing ‘hare’.

The ‘aggregation of marginal gains’

We were recently asked to review two competing collaborative efficiency plans for a client. The existing plan was a genuinely transformational programme with a new ICT system and shared service as the centre pieces, coupled with two unrelated, smaller projects.

On paper it looked good with an attractive return on investment and NPV, and it was strongly advocated by the large consultancy house that put the plan together. However, there was one voice in the organisation who wasn’t happy and was arguing for a programme of small, incremental improvements. As they described the work, we immediately pricked up our ears because we’re huge fans of the ‘aggregation of marginal gains’.

This is the philosophy that has powered British Cycling’s domination of the Olympic medal table and Tour de France in recent years. Put simply, the idea is that it’s much, much easier to find 10 ways to improve by 1% than it is to find one single action that gives a transformational 10% boost in one shot (after all, cycling’s Lance Armstrong tried that approach and it didn’t go so well…).

What ‘Monte Carlo’ has to say about project risk

To understand this better, we worked with the team to get a better depiction of the risks in the two competing savings programmes. We used an approach called ‘Monte Carlo simulation’ since this is central to the Treasury Green Book approach to risk and therefore the ‘gold standard’ for public sector projects.

Monte Carlo simulation is the proper way to account for risk. It is based on the fact the real  world has considerable uncertainty in it and recognises that sometimes things don’t go to  plan (the maths behind it was derived as part of the American nuclear missile programme, so  yes, it is rocket science!).

The simulation allowed us to test a range of possible outcomes and gain detailed insights  into the nature of the risk and the range of benefits that might be expected. In the traditional analysis, the organisation simply added up the expected benefits, deducted the expected costs and produced a total net benefit. In the simulation, we were
able to take full account of the fact that, in the real world, costs and savings may be higher, or  lower, than these theoretical amounts.

The tortoise beats the hare

But when the risks were properly accounted for, the ICT led programme looked far inferior. We’ve shown a simplified version in the chart on the next page, which illustrates how likely it  is that savings will be achieved, given the risks within the programme.

For the ICT programme with the risks factored in, there was only a 50:50 chance of achieving net savings of up to £0.4m and a 20% chance of the programme leaving the organisation an eye-watering £2.3m worse off!

In contrast, the incremental improvements strategy (the tortoise) has an 80% chance of delivering up to £1.5m, and even in a worst case scenario it never lost money.

It is true, that if the ICT led approach went particularly well, it would be slightly advantageous, however the chances are quite low and the winning margin small, but… if it wasn’t successful, it leaves the organisation exposed to a position £4.2m worse than it was budgeting for!

The key difference was that for the ICT led strategy, the risks were concentrated into a single large project, fail and the whole plan goes with it.

In the incremental gains strategy, the risks were distributed over a collection of 10 smaller projects. Hence the former is an ‘all eggs in one basket’ strategy, the latter is a ‘balanced portfolio’. We especially like this term because, if this were an investment plan, you’d always look for a balanced portfolio and it makes intuitive sense to apply the same logic of risks to savings plans. The inescapable conclusion was that the incremental gains strategy was far more prudent, less risky and more likely to be a success.

We suspect that a similar analysis would change the strategies of many organisations currently seeking savings (and maybe the HS2 business case when compared with a suite of smaller local projects?) but there is a big barrier to incremental improvement. It has an image problem.

Frankly, it’s just not sexy. Not many people will put their hands up to lead the ‘organisational housekeeping and doing some things a little bit better programme’ when there’s a Head of Transformation role in the offing!

That’s why we love that British Cycling has a Director of Marginal Gains since this turns things on its head!

Secondly, maybe there isn’t a lot of money to be made by consulting firms who want to support the roll-out of their suggested major change programme, or business schools and authors seeking to promote their latest ‘killer insights’.

Thirdly, it’s important to note that there may be genuine times when incremental improvement just isn’t going to work. For example, the existing business models, demand and resourcing strategies could be at their limit and simply can’t be stretched any further.

The final barrier is that big bang, transformational approach just looks so seductive, on paper. So if it fails it’s all too easy to blame the unlucky manager given the job of implementation and never get to the bottom of the real problem.

In reality however, the risks were always there in the original plan, hidden from sight by a failure to properly compute them and the project was doomed from the start.

Maybe that Head of Marginal Gains role is starting to look a bit more attractive! 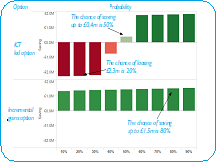