Margate is located on the coast of Thanet in Kent and has a rich history as one of the original English seaside resorts, popular with tourists since the eighteenth century.

However, following the rise in overseas package holidays from 1970s onwards, Margate struggled to restructure its economy and high levels of unemployment and benefit dependency followed.

The Margate Task Force (MTF) was formed in 2010, when the growing socio-economic challenges led to the realisation that a number of separate organisations were working in a concentrated area with the same families, but not in a coordinated multi-agency approach. Could there be a better way to work collaboratively for improved outcomes for residents?

The MTF originally focused on Margate Central and Cliftonville West wards as these were in the bottom 3% of the most deprived areas nationally and had high unemployment, crime and anti-social behaviour.
Since its formation, the MTF has been hailed as a model of good practice by UK government, local authorities and related agencies. It allows decisions and priorities to be set at a local level, transforming the way that public services work collectively and visibly.

Who is involved in the Margate Task Force?

The team is distinct from other multi-agency teams as it delivers ‘front end’, fast-track interventions collaboratively at street level on a ‘day in, day out’ basis.

What are the core objectives?

Here is an example of how this works. If firefighters are called to respond to a house fire and suspect it has been caused by poor maintenance or crime, or that the property has more occupants than it should have living in it, then this information is shared with other agencies to help support the residents. This makes public services responsive, visible and joined up.

Benefits of a co-located team

The co-located team responds from a single operations centre, allowing them to better understand and respond to issues.

Rather than having an allocated budget, each agency provides personnel.

MTF also works with local charities, other councils and overseas counterparts to better understand the wider consequences of the social issues in Margate and to match demand to those able to provide help.

There are a number of multi-agency teams working at local authority level across the UK, however, the unique challenges of Margate called for a hands-on-approach. This has been achieved through:

● ‘Street Weeks’ where every home on a street is visited by MTF representatives and given advice on safety and health. This means that the team is able to gain information and identify suffering, risk and vulnerabilities.
● ‘Resident Lead Partnerships’ to act as a focal point for the community, empowering residents to take responsibility for their own environment and safety.
● ‘Neighbourhood Responsibility Panels’, to help people move away from undesirable behaviour.

What are the community’s benefits?

Information sharing across agencies has enabled a more effective and efficient service for residents.
It prevents duplication of effort and anticipates and responds to potential problems.

A snapshot of successes has included:

● Engaged with 559 children in 112 schools through Safety in Action sessions.
● Eight Street Week operations in 2016, covering 55 streets, which resulted in over 80 referrals.
● The usual turnaround time for agency referrals is “within 28 days” but the MTF process forms within a week and immediate referrals are processed within three working days.
● Ongoing support to Oasis Domestic Abuse Service, including providing a victim and family with food, presents and clothing over Christmas.
● Sponsored twelve young people at high risk of becoming involved in criminal activities to take part in The Duke of Edinburgh’s Award. They have all flourished, progressed to Silver and became mentors for others.
● Took part in an operation, which resulted in the seizure of substantial amounts of illegal tobacco in 2016.
● Assisted in the creation of two new ‘Community Alcohol Partnerships’ which aim to create a culture where young people drink responsibly and involved working with 30 shops and 6 schools.
Provided funding for the Cliftonville Community Centre, which has allowed for an EU Group and Muslim ladies sessions to be held there. Task Force partners also help with issues such as housing, homelessness and fire safety.
● In April 2016, as a result of its success, the team expanded to cover the Central Harbour and Eastcliff neighbourhoods of Ramsgate and accepts referrals from the whole district.
Measuring MTF’s success
MTF’s collaborative working has been praised in many ways:
● MTF won the prestigious Collaboration Award at the inaugural national Fighting Fraud Awards in December 2012.
● Marta Andreasen, MEP, stated that “The work being done by Margate Task Force to integrate migrants into the Margate and Cliftonville areas should be copied across Britain and Europe.”
● A joint HM Treasury and DCLG report found that there “are real service improvements and savings to be made in all places from this way of working.” The Margate Task Force model was identified as an example of overcoming “historical divides between organisations” resulting in better services for the individual.

● The Family Liaison Officer at a local primary school wrote to MTF: “I would just like to share my appreciation for all the help that Margate Task Force gives our children. The Task Force is a regular visitor to our school and for the last few years it has delivered safety talks to our Key Stage 1 and Key Stage 2 children.

Members of the Task Force also attend a yearly open evening we hold; taking questions from the parents and advising where necessary which is well received by parents. We really value our relationship with MTF and the impact their support has for our children.”

What three things would we do differently if starting again?

● Establish an approach to sustainability to ensure community ownership and public trust, which are essential to securing lasting social change.

● Identify reporting lines earlier on in the project, give greater clarity over the Task Force’s long term direction.

● Identify outcome and outputs, rather than performance targets, to better demonstrate success. 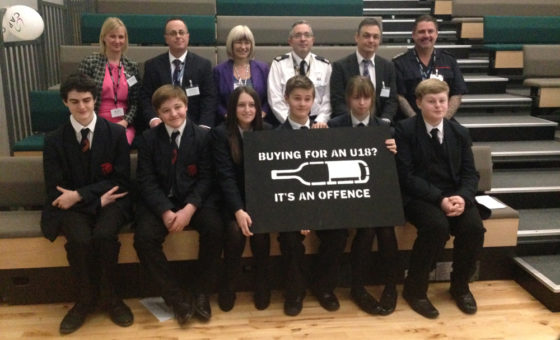