ACAS offer examples of the key 2014 changes to TUPE 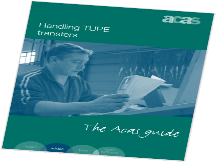 When a shared vision emerges of what the new joint service will feel and look like, a picture of the future staffing structure to deliver the new project will begin to emerge too.

As a result, it is important to bring in HR expertise and potentially union engagement as soon as a picture of the personnel consequences of the shared vision emerges.

TUPE, or not TUPE

The TUPE Regulations protect the pay, terms and conditions of transferred employees, preventing these entitlements being changed without agreement. The regulations also protect their accrued pension rights, provide some protection against unfair dismissal and state that trade union recognition and collective agreements in force at the time of the transfer, should be maintained.

However, from 31 January 2014, the Department for Business, Innovation and Skills moved the goal posts in favour of employers, through a number of important changes to TUPE which can affect the approach to developing collaborative working.

A key change is highlighted by ACAS in their 2014 Changes To TUPE guide which is very helpful in that it provides practical examples of what the changes could mean. We have highlighted three that stand out in relation to shared service working.

Implications for a new, different, lower-cost delivery of services

This change relates to whether TUPE applies if the job being done afterwards is “fundamentally the same” as was being done before.

Carole’s Systems contracted with John’s Catering to cook and serve hot dinners in the company canteen. The new contractor continues to provide the same service but they supply new utensils and the ingredients are sourced from a different supplier. TUPE is likely to apply as the activities are ‘fundamentally the same’.

Rachid’s Catering won the tender but TUPE is unlikely to apply to the staff of John’s Catering because the activities are not ‘fundamentally the same’.

The implications for shared service working is the shape and activity of the new, better, lower-cost service. Is it providing the equivalent to the hot dinners way of doing things in the past?

Or, has it innovated or changed in such a way that it now delivers the equivalent of the pre-packaged meals – for example commissioning delivery, rather than delivering itself?

A second key area of change is that dismissals are no longer automatically unfair because of a change in workplace location. ACAS provides this example:

Carole’s Bus Company won the contract to provide a bus service. Following the transfer, employees were required to work from a different depot 16 miles away. Under the old rules:  The employees refused to move and resigned, arguing this was a substantial change to their working conditions. At the tribunal they were found to have been automatically unfairly dismissed. Under the new rules:  During consultation prior to the transfer, Carole’s Bus Company put forward a range of support proposals to reduce the effects of the location change, including a severance package and was able to defend the dismissals at the tribunal.

This will have an impact where sets of employees from across  the partners are co-located, and newly employed, by one of the partners.

ACAS’s final example is that incoming employers will be able to renegotiate terms and conditions agreed in a collective agreement one year after the transfer as long as the overall change is no less favourable to the employees involved.

This only relates to the parts of an employee’s terms and conditions that are covered by a collective agreement. Other changes are subject to standard TUPE protection.

For example, Carole’s Cleaning bought a part of John’s Cleaning. There is a collective agreement in place at John’s Cleaning under which a trade union is recognised and has bargaining rights for pay. The weekly pay rate at John’s Cleaning is higher than that at Carole’s Cleaning though the working week is longer. Under the old rules: …any changes to pay where the sole or principal reason is the transfer will be unlawful. Under the new rules: …after a year, changes to pay can be agreed provided that the overall terms and conditions are no less favourable.  Carole’s Cleaning negotiate a reduction in weekly pay whilst maintaining the overall benefits package for the ex-employees of John’s Cleaning. Take advice from the experts. We have provided you with examples of how the changes could impact on shared service working. However, you should read the full ACAS guide and take advice from the experts before drawing any conclusions about the best way forward for your shared service activity. We will update you through the SSA magazine on changes to TUPE and collaborative working as it unfolds in Tribunal Case law.