Could community budgets save the public sector up to £20bn? 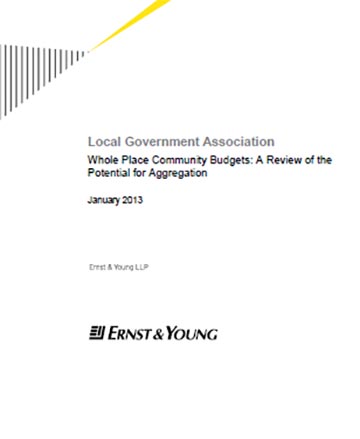 An analysis published by the Local Government Association claims that savings, well beyond anything front or back-office shared service projects have to offer, can be made through community budgets.

Modelled by Ernst & Young, their report illustrates how £4 billion of public money could be saved every year, for five years, by restructuring the way public services are provided and paid for in England.

The results of a year-long pilot of community budgets, modelled to a national level by Ernst & Young, show that devolving more decisions to local areas would provide better services and save between £9.4 billion and £20.6 billion over five years across local and central government.

Community budgets work by bringing together public sector money and resources in local areas to give authorities like councils, the police and health service the freedom to integrate their work and design services around the needs of people who use them.

They mark a fundamental shift away from the traditional public sector method of cascading funding of services by government departments into their respective sector silos.

The report confirms that these substantial savings will be achieved if there is fundamental reform of the funding of public purpose activity. Reforms on such a scale would require upfront investment and it would take several years for the full extent of savings to materialise. But more than that, there would have to be a reform of the central government departments, with less ministerial control.

For example the report calls on Government to:

Is this Total Place by another name?

You would be right if your memory reached back to the last Labour Government’s introduction of the same concept under the name ‘Total Place’.

You gain even more points if you remember the ‘Calling Cumbria’ and ‘Counting Cumbria’ projects which set out in April 2008 as the first of their kind to blur the working boundaries of the public purpose agencies in the county.

By August 2009 there were 13 projects in play across counties and unitaries in England with a wide range of focus.

Birmingham set out to examine its health, housing and crime, including services for people with learning difficulties, mental health, outcomes for children leaving care, guns and gangs, and how the city tackles drug and alcohol misuse.

Kent explored how people could get better access to services through the web, or by phone, and whether the public sector players could generate savings by sharing buildings or pooling resources in the most deprived areas.

By the end of 2009, each of the 13 pilot areas had produced ‘deep dive’ financial reports and business plans were published and presented to Ministers, CLG and Treasury.

Then in March 2010 CLG and Treasury published ‘Total Place: A whole area approach to public services’ with the introduction:

The Total Place initiative sets a new direction for local public services and local authorities, with a

range of freedoms that define a new relationship with Government. It has shown how, through bold local leadership and better collaborative working, it is possible to deliver services which meet people’s needs, improve outcomes and deliver better value for money.

The Total Place approach – putting the citizen at the heart of service design – has helped opened the door for local partnerships to discover what can be done to improve the system and to push forward great, innovative, ideas and solutions to change the way services are delivered. It has meant looking for new ways of co-operation, at local level and between local level and Whitehall..

But it was really like the chairman of the football club stating publicly that the manager has their full support.

Within months it all seemed to go quiet on Total Place as the Coalition Government became distracted by the economic collapse they were inheriting.

Attempting to cut budgets, and re-organise at the same time has rarely proved as successful as, either cutting budgets or investing in re-organisation. Total Place demanded substantial investment in re-organisation and that was unlikely to happen.

Community Budgets emerged in 2012 as the new name for Total Place and four pilot projects grew from the ashes of the 13 original plans.

Their results have been published and it is from those results that Ernst & Young have extrapolated the numbers to come up with the £4bn a year savings figure.

Where will the savings be made in community budgeting?

Ernst & Young estimates are that local services would make a fifth of the potential savings, the remaining 80% would be saved by central government departments and agencies.

The LGA has previously warned that councils – which have borne the brunt of the Government’s spending cuts – will be unable to sustain a further squeeze to their budgets without fundamental reform of the way services are delivered and paid for.

But the report suggests that savings made through community budgets would help the police, NHS and other services manage cuts, so maybe they can take some of the pain.

In summarising the report, LGA Chairman Sir Merrick Cockell sees Community Budgets as an innovative opportunity:”Shaping public services around the people who use them rather than the organisations which provide them makes better sense for everyone. It means people get better, more joined-up services and taxpayers get better value for money.”